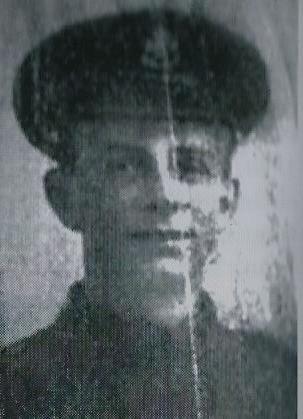 He was the son of Jacob (Bus Driver) and Martha Ann (née Shirt) Whieldon. Norman had an older sister, Elsie, and five younger siblings, Maud, Gertrude, Harry, Mabel and Stanley.

On 27th August 1916, at St John the Baptist Church, Buxton, Norman married Jane Burdy Poustie, daughter of John Poustie (Ship Builder), of 18 Bath Road, Buxton. On the Marriage Certificate Norman gave his address as “7 Woodland View, Buxton” and “The Curragh Camp, Ireland“, the latter being his base with his Regiment in 1916.

With effect from 22nd April 1918 Jane was awarded a Pension of 13s 9d [£0.69 – about £42 today] per week. There were no children named on her application. She had moved from the Bath Road address to 4 Clifton Road, Buxton.

[N.B. Norman’s aunt, Priscilla Kiel (née Whieldon) was the mother of John Hermann KIEL, who died of wounds on the 14th December 1918 – see Footnote below] 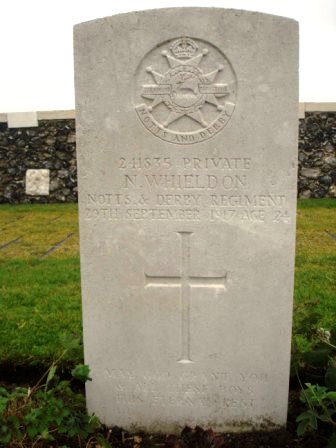 Military Service: Norman enlisted into the Sherwood Foresters (Notts and Derby Regiment) on a Short Service attestation at Buxton. His Service Papers have not survived and his Medal Index Card does not give a date for when he was posted to France, but as he was not eligible for the ‘1915 Star’ medal it must have been after 1915. 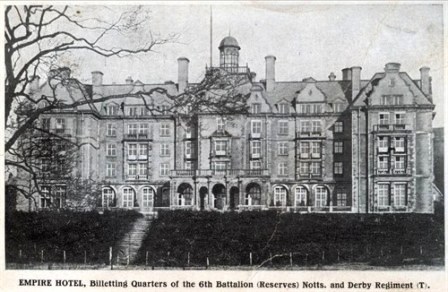 It seems that Norman was a “Derby Scheme” man with an original 4-digit number 4965. He was called up to 2/6th Battalion on 12th February 1916. The 2/6th Battalion was formed at Chesterfield on 14th September 1914 as a second line unit. It moved on 2nd November to Buxton, with Battalion HQ occupying the Empire Hotel [see right].

After a lengthy period of training the 2/6th Battalion, together with the rest of the 178th Brigade, left Watford and embarked for Ireland on Tuesday, 26th April 1916. At the time Norman joined the Battalion, it was still serving in Ireland, and when he married on 27th August 1916, his address was recorded as ‘The Curragh Camp, Ireland’, on the 13th October 1917.

When reporting Norman’s death, ‘The Buxton Advertiser’ stated that he “… went through the Irish rebellion“.

On 12th January 1917, the Battalion moved to Fovant before landing at Boulogne on 25th February 1917. 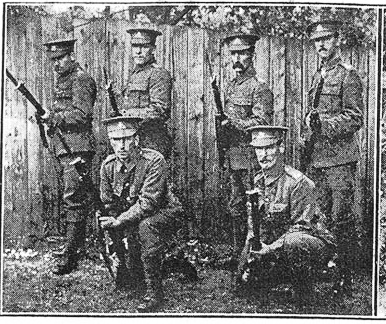 Norman was photographed for ‘The Buxton Advertiser’, whilst in training with the 6th Battalion, under the heading “Buxton Patriots in Training“.

He is on the left of the back row, with Privates Clarke, Greaves and Emmerson. In front are Privates Burton and Norton.

During the Third Battles of the Ypres (31st July – 10th November 1917) the 2/6th Battle were engaged in several phases as part of the 178th (2/1st Sherwood Forester) Brigade, particularly The Battle of the Menin Road Ridge, 20th – 25th September, and The Battle of Polygon Wood, 26th September – 3rd October 1917. 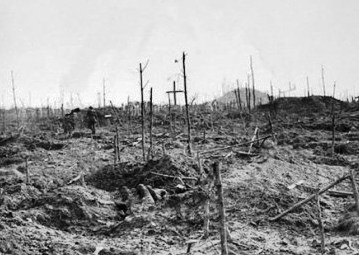 The 2/6th took part in The Battle of Polygon Wood (pictured left after The Battle), 26th to 29th September, and they were forward of Wieltje.

The Battalion sustained 11 officer and 220 other rank casualties, many from continuous enemy  shelling. ‘The Buxton Advertiser’ reported that Norman was serving as a “Lewis Gunner“.

“5.50 a.m. – After heavy artillery barrage Battalion left its kicking off position, with 2/7th SF on the left and the 177 Bde on the right. The objective which was from D14d36 inclusive to the Gravenstafel Road (exclusive) was reached about 7.30 a.m. A number of prisoners were taken. The enemy shelled our positions during the day.”

“27th – Shelled heavily during the day. 8pm Relieved the 2/5th Bn SF in the front line, who had held the 2nd objective.“

… about The Battle of Polygon Wood

It must have been during the withdrawal on the 29th that Norman was killed in action. CWGC records show 66 Officers and men of the 2/6th Battalion who were killed during The Battle of Polygon Wood (26th September to 3rd October), mostly on the 26th. Three other men of the 2/6th, besides Norman, died on the 29th.

His parents were informed by “Lieut. Brightwell, of Tideswell [Derbyshire] who was the Officer in charge at the time. Whieldon was an efficient soldier.”

Norman was the cousin of Pt. 60240 John Hermann KIEL, 15th Bn. West Yorkshire Regiment, who died of his wounds in York Military Hospital on 4th December 1918.

A number of other Buxton men enlisted in the 2/6th Battalion at about the same time as Norman – judging by their Service Numbers – and gave their lives: