Personal: Henry was born in the March quarter 1885 in Stoke-on-Trent, Staffordshire, the son of William (Potter’s Presser) and Annie (née Snow) Brunt. He had a younger sister, Elsie Fanny, and in 1891 (Census RG 12/2177) they lived at 3 Albion Street, in Stoke-on-Trent. The following September quarter a younger brother, Percy, was born. 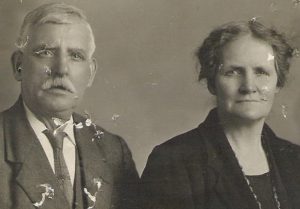 In the June quarter 1894 Henry’s mother, Annie, died, in Stoke, but the family had moved to Buxton by the time his father, William, remarried Elizabeth (Lizzie) Hannah Shaw on Boxing Day 1895 (pictured right in later life).

Henry, however, was no longer living at home but was working as a live-in “Page” at The Union Club, St John’s Road, Buxton. (Census RG 13/3270) [modern photograph – left]

Henry was employed as a “Library Assistant” at the University Library of Sheffield [see below]. They had no children. On his enlistment in 1915 he gave his occupation as “Shelf Checker“. He was 5 ft. 4¾ ins. (1.65 m.) tall.

Pension Records show that with effect from 28th July 1920 she also received a Pension of £1 (about £40 per week today). At that time she was living at 101 Forres Street, Sheffield. 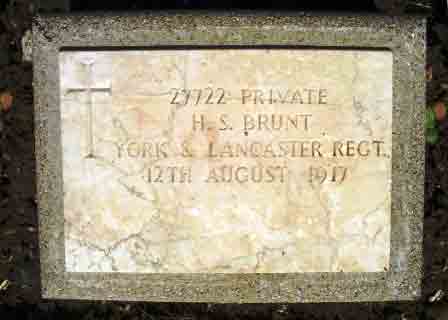 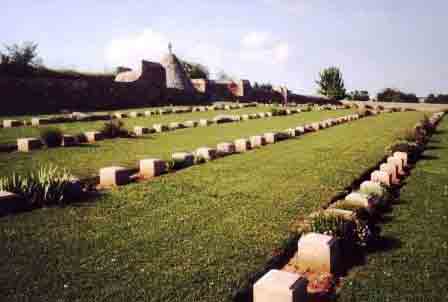 Military Service: Henry enlisted in the York and Lancaster Regiment at Sheffield on 4th December 1915 and went straight to the Army Reserve. On the 15th June 1916 he was mobilized and the next day posted to the 3rd Battalion. On 28th October 1916 he was transferred to the 1st Battalion and posted to the ‘Mediterranean‘ theatre.

The 3rd (Reserve) Battalion of the York and Lancaster Regiment was formed at Pontefract in August 1914 as a depot/training unit. On mobilisation it moved to Cleadon and in January 1915 went on to Sunderland. The Battalion moved again in August 1915 to Durham but returned to Sunderland in February 1916 where it remained as part of the Tyne Garrison.

Maybe, with little prospect of serving overseas, Henry asked for a transfer to the 1st Battalion, which had been in Jubbulpore in India at the  outbreak of the War. It returned to England on 23rd December 1914, moving to Hursley Park and joining the 83rd Brigade in the 28th Division. On the 17th January 1915 the Battalion was posted to France, landing at Le Havre. They were posted again to Egypt in October 1915 and from there on to Salonika, arriving in early December.

Pension Records state that Henry succumbed to one of the many illnesses or diseases rife at that time and died on 12th August 1917 of “Malignant Malaria“.

Henry is buried in The Lahana Military Cemetery which was begun in July 1916 for burials from the 27th Casualty Clearing Station, to which sick and wounded men were brought from the Struma front.

The cemetery was also used from June to August 1917 by the 18th Stationary Hospital. After the Armistice, 41 of the graves in Plots II and III were brought in from the two front line cemeteries at Paprat (about 12 km north-west of Lahana) and from other small burial grounds. This may have included Henry who lies in Grave III.E.15.

This entry was posted in Lahana, WW1 Names, York & Lancs. Bookmark the permalink.