In 1901 (Census RG 13/3263) the family were living at ‘Cottage‘, Chelmorten, Buxton. George had three older sisters, Zelinda, Mary Elizabeth and Mabel, and a younger sister, Alice.

In 1911 (Census RG 14/21230) George had moved to Ravenstor House, Millersdale, Derbyshire, living as a “Servant“, working as a “Mail Driver“, in the home of Thomas Holmes and his daughter, Letty.  [See: Footnote below]

George’s parents and sisters had moved to 20 Bennett Street, Buxton. (Census RG 14/21242) Living with them was Walter Limer [See: Footnote below] and his son, Walter William. Walter had married George’s eldest sister, Zelinda, in 1904. [At the time Zelinda was employed as a “Chamber Maid“, living at the Haddon Hall Hydro, London Road, Buxton.]

In reporting George’s death in June 1915, ‘The Buxton Advertiser’ stated that he was “… employed by Chapel-en-le-Frith Rural District Council“.

In 1939 William and Mary were living at 25 South Avenue, Buxton, with their daughter, Mabel. William died in Buxton in February 1945 and was buried on 3th March in Grave 3479, Buxton Cemetery, aged 83. Mary was 90 years old when she died in June 1952. She was buried with William on 2nd July. 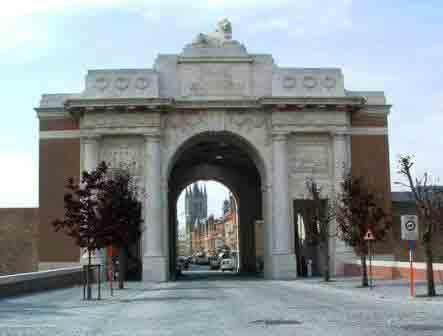 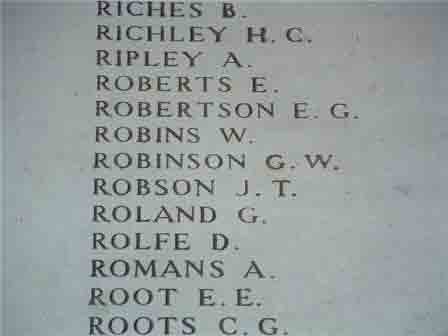 Military Service: George enlisted into The Middlesex Regiment at Buxton. His Medal Index Card shows that he was posted to France on 16th March 1915.  ‘The Buxton Advertiser’, 2nd June 1915, reported that he enlisted “…in December last.” [i.e. December 1914]. Unfortunately, his Service Papers, like so many others, were lost in September 1940, when a German bombing raid struck the War Office repository.

The 3rd Battalion, Middlesex Regiment, was formed in August 1914 in Cawnpore, India, and returned to England in December 1914, which seems to be when George enlisted. The Battalion moved to Winchester and was attached to the 85th Brigade in the 28th Division. They originally embarked at Southampton and landed at Le Havre on 19th January 1915 before moving to concentrate in the area between Bailleul and Hazebrouck, so George must have been posted to join his Battalion after training.

George was first in action during The Second Battle of Ypres, 22nd April – 25th May 1915, and in particular The Battle of St Julien, 24th April – 4th May, during which he was killed in action.

After the French line was broken at Ypres on 22nd April, following a German gas attack, two Companies of George’s Battalion, ‘A’ and ‘C’, were ordered forward to fill the breach. At 6.20 a.m. the following morning and reinforced by Canadians, the 3rd Middlesex advance on the German positions and entrenched by 9.00 a.m.

They came under heavy rifle and shell fire, as well as a further gas attack. Another advance was ordered in the afternoon over open countryside and into five enemy machine gun posts. Between the 22nd and 25th April 1915 the 3rd Battalion lost 38 men killed and many more wounded, so much so that A’ and ‘C’ Companies had virtually ceased to exist.

[Among the Canadians who advanced to reinforce the 3rd Middlesex were two other former Buxton men, Pt. 7729 Alfred Chantry, and his brother, Pt. 7730 William Chantry. Both had emigrated to Canada and on the outbreak of War had enlisted together in the 2nd Battalion, Canadian Infantry. Alfred was killed on the first day of the Battle, 22nd April 1915, and is commemorated on this site.]

On the 1st and 2nd May 1915 George’s Battalion were working to strengthen their trenches in anticipation of an enemy attack. They were shelled and suffered a number of losses. The War Diary for the day George was killed, 3rd May, reads:

“Situation at 4.30 a.m. Normal. Fairly heavy bombardment all day, 24 Trench was heavily trench mortared. Orders were received during the day that the present trenches would be evacuated that evening and another line in rear taken up, so as to straighten the line there. The following were the orders issued:-
1.    The 5th Corps will shorten its line to right – 25th Division will hold the section N. & S. of FREZENBERG, holding the newly entrenched line with the Battalions of the 83rd and 84th Brigades now in reserve.
2.    85th Bde. will withdraw to billets as follows:-
2nd East Surrey – B3c
Remainder of Bde. to squares G4 – G5 – G6
Units will be met by their billeting parties now west of YPRES and guided to the billets now being allotted to Quartermasters by the Staff Captain.”

During The Battle of St Julien (see Footnote below) the 3rd Battalion had 59 Officers and men killed in action, mostly, 29, like George, on 2nd May. All but one has no known grave and are commemorated, with him on the Ypres Menin Gate Memorial.

Originally Ravenstor House was a private house built in 1907 for the owner of Litton Mill, Matthew Dickie. It is now Ravenstor Youth Hostel.

The village of St. Julien had been comfortably in the rear of the 1st Canadian Division until the poison gas attack of 22nd April, when it became the front line.

Some of the first fighting in the village involved a hasty stop, which included the stand of Lance Corporal Frederick Fisher of the 13th Battalion CEF’s machine-gun detachment; who twice went out with a handful of men and a Colt Machine-gun and prevented advancing German troops from passing through St. Julien into the rear of the Canadian front line.